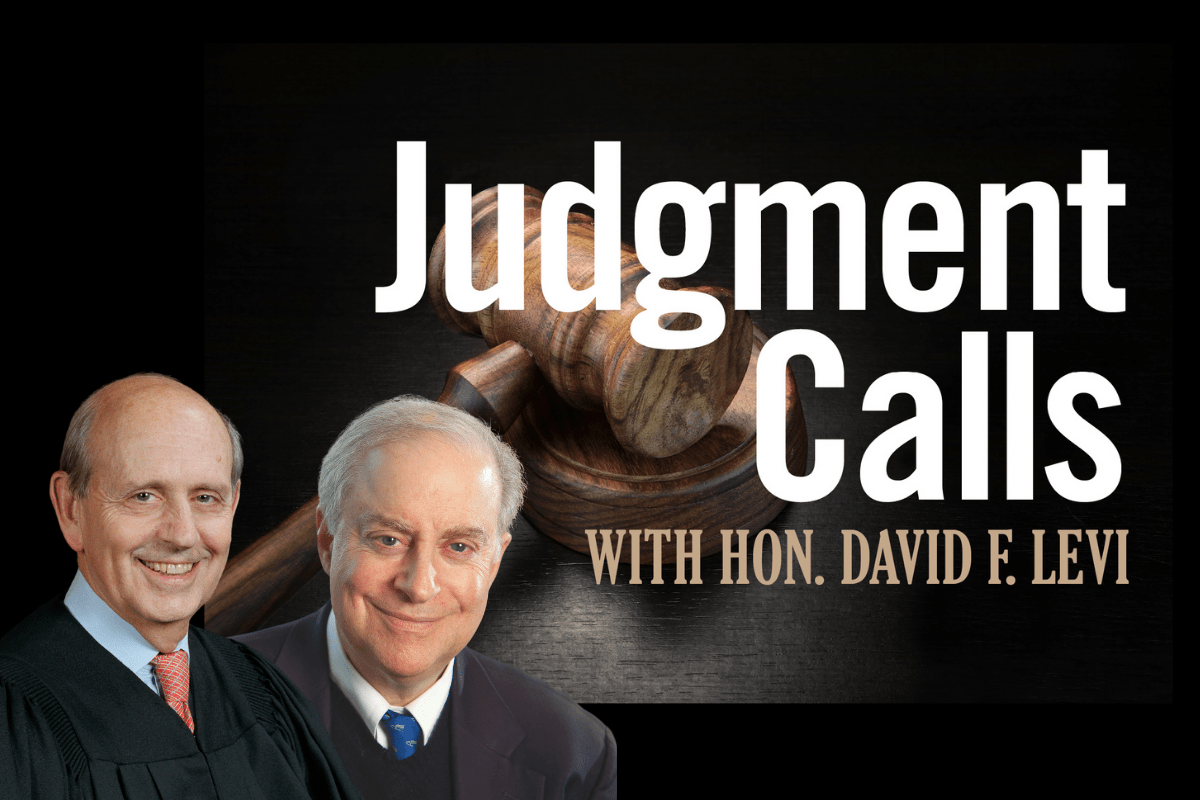 United States Supreme Court Justice Stephen Breyer spoke about his new book, The Authority of the Court and the Perils of Politics, and his views on judicial decision-making with David F. Levi, director of the Bolch Judicial Institute at Duke Law School and president of the American Law Institute, for the latest episode of Levi’s podcast, Judgment Calls, and the ALI podcast Reasonably Speaking.

During the hour-long conversation, Breyer reflects on his 27 years on the Court and discusses the roots of the Court’s authority and its relationship to the political branches of government. The power of the Court, he says, resides in the people — in their faith in the institution, their belief in the rule of law, and their understanding that the Court operates outside the political realm. The peril of politics, he says, is that if people begin to see judges as nothing more than ‘junior league politicians’ — or as making decisions in order to help a political party or to advance a political agenda — the Court’s power will erode, along with the rule of law.

He recalls that the Chief Justice of Ghana once asked him where the Supreme Court got its power, and why Americans accept and abide by its decisions. After all, as Alexander Hamilton famously noted, the Court has no military or economic power to enforce its decisions. In considering the question, he offers examples of Court decisions that were not enforced — or were actively subverted — by the government: The Court’s 1832 decision in Worcester v. Georgia found that Georgia state law did not apply on Cherokee Nation land; President Andrew Jackson’s refusal to enforce the decision ultimately led to the Trail of Tears. Similarly, states refused to enforce Brown v. Board of Education, and segregation in schools persisted for years despite various efforts by the federal government to force integration.

“I wanted the Chief Justice of Ghana to know that it’s not God-given that people would follow what the Court says,” Breyer explains. “If you want a rule of law, if you want it in reality and not on paper, you can’t just talk to the judges and you can’t just talk to the lawyers. Everybody thinks they want a rule of law. That’s how they make their living. But it is the people in the towns, in the villages. Contrary to popular belief, of our 331 million people, 330 million are not lawyers. And they’re the ones that have to be convinced that it is in their interest to follow decisions, even when those decisions affect them in a way they don’t like, and when those decisions are wrong — because if, after all, it’s five to four, somebody’s wrong.”

But in America today, Breyer says, very controversial decisions are accepted. Consider a decision as contested as Bush v. Gore, he says. There were no shots fired after Bush v. Gore, he notes, because “Americans have reached a point where they don’t even think about the decisions of the Court, not following them. They think it’s like the air we breathe. People do. And that doesn’t happen by magic. That happens by people understanding the country, by living a history, by having examples.”

That faith in the Court is risked, however, if the public begins to see the Court as a political actor — a perception that the judiciary must counter, he says. He discusses the differences between political decision-making and judicial decision-making, arguing that while judicial philosophies and personal experiences may influence an individual judge’s views, judges must be guided by the law, not political constituents. That doesn’t mean, however, that judges don’t have differing views of what the Constitution means.

“After a while, I began to understand this is a big country, and people think all kinds of different things. And it is not such a terrible thing to have a Supreme Court with nine members where different presidents appoint different judges,” Breyer says. “Ultimately, the country has to suffer from, or rejoice sometimes, or in any case live with the decisions and interpretations of the Court. What Justice Scalia happens to think, or Justice Breyer or Justice O’Connor, about the Constitution is of great interest to many law professors, but not to most people in the United States. It is the Constitution as interpreted by the Court that matters.”

Breyer also discusses the power of deliberation and compromise as a way for the Court to generate public trust and as a way to develop and strengthen common values that can bind the country together in times of division — “remembering that the Constitution has as a basic principle — one of the things that I think is most important — is the principle that it works. The principle that this society does hold together, the principle that this society has certain basic values, and they work. . . . That’s our society. We pull together in light of those rather basic constitutional ideas.”