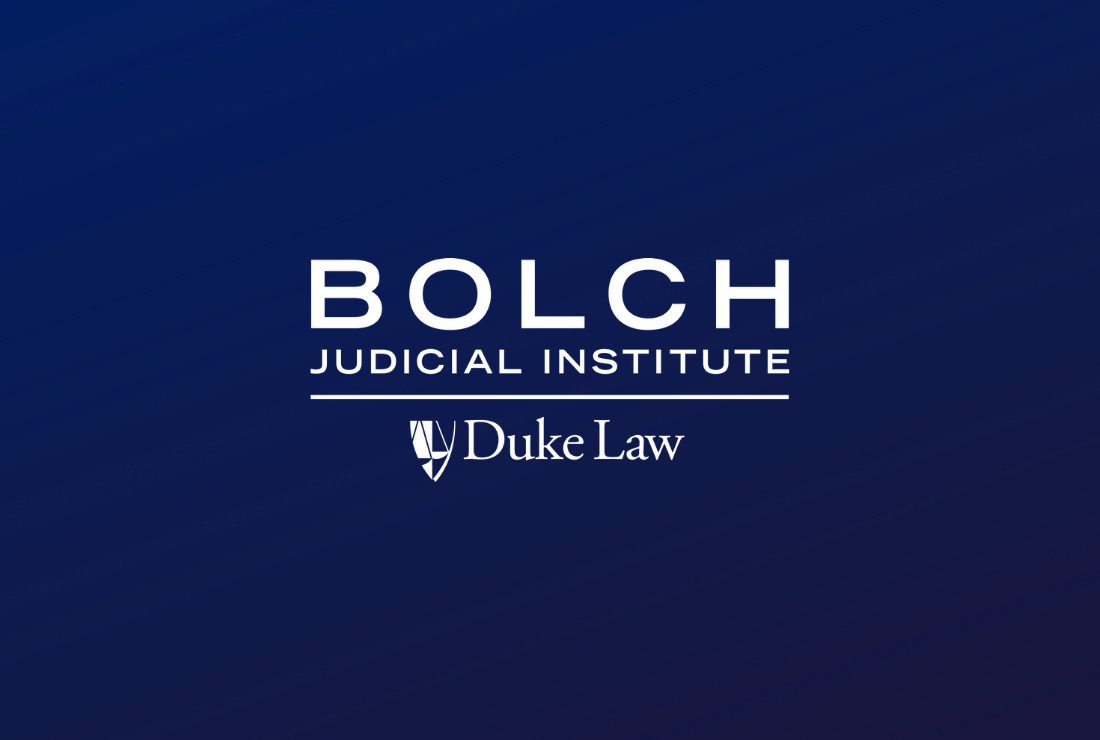 At a year-end meeting in Washington, D.C., the Advisory Board unanimously approved a resolution acknowledging Levi’s service as Founding Director of the Bolch Judicial Institute. The resolution commended him for developing the Institute into “a national force for advancing the rule of law, improving the administration of justice, and bolstering judicial independence.” In his role as Director Emeritus, Levi will continue serving on the Institute’s Advisory Board.

Scroll to read the full resolution.

WHEREAS, David F. Levi served with distinction as Dean of Duke Law School from 2007 to 2018; and

WHEREAS, during his tenure as Dean, David saw the need for an institution that could bridge the gap between the judiciary and the academy in working toward a shared goal of improving the administration of justice; and

WHEREAS, in order to meet that need, David established the Duke Law Center for Judicial Studies and a Master of Judicial Studies LL.M. program for sitting judges, the only master’s degree program of its kind at a top U.S. law school; and

WHEREAS, David recognized the value of the scholarly journal Judicature to the judiciary and the legal profession and, upon the dissolution of the journal’s publisher, The American Judicature Society, David negotiated terms by which Duke Law School and the Center for Judicial Studies would take over the publication, thus preserving the journal’s many contributions to the judiciary and stabilizing its future; and

WHEREAS, David collaborated with Carl Bolch Jr. and Susan Bass Bolch to realize their aspirations for an Institute devoted to the protection and advancement of the rule of law worldwide that could build upon the work of the Center for Judicial Studies while dramatically expanding its mission, efficacy, and reach; and

WHEREAS, David completed an 11-year term as Dean of Duke Law School and became the founding director of the Bolch Judicial Institute upon its creation, thanks to the generosity and vision of Carl and Susan Bolch; and

WHEREAS, David quickly established the Bolch Judicial Institute as a national force for advancing the rule of law, improving the administration of justice, and bolstering judicial independence; and

WHEREAS, David developed conferences, symposia, and workshops that brought judges, academics, and lawyers together to study challenges facing the legal profession, to develop best practices for improvements to the administration of justice, and to create a network of leaders who shared in the Institute’s mission to better the human condition by strengthening the rule of law; and

WHEREAS, through Institute programs and through service to the Law School as a professor and chair of the clerkship committee, David created myriad opportunities for law students to engage with the Institute and with the judiciary, as research assistants and student editors for Judicature, in classes taught by sitting judges and justices, in pursuit of clerkships and externships with judges, and in informal and formal meetings that provided unparalleled insight into the functioning of the courts and the work of the judiciary; and

WHEREAS, David developed countless civic education initiatives designed to deepen the public understanding of the courts and the work of judges, including video series and podcasts, panel discussions and roundtables, publications, speeches, and more; and

WHEREAS, David established, with the late Professor Francis McGovern, a multifaceted — and now top-tier — civil litigation program with educational offerings to prepare judges and lawyers for leadership roles in mass tort multidistrict litigation and with scholarly programs that encourage academic study and teaching in a field that is rapidly changing the face of federal civil litigation; and

WHEREAS, David has laid the foundation for expanding the Institute’s efforts in the international arena, through Judicature International and its global editorial board, through new relationships with judges and judicial organizations throughout the world; and through the growing international prominence of the Master of Judicial Studies degree program and other educational offerings; and

WHEREAS, David has created partnerships and collaborations between the Institute and countless organizations with complementary agendas, including the American Law Institute, the American Judges Education Institute, the Rendell Center for Civics and Civic Engagement, the Federal Judicial Center, the National Center for State Courts, and many others, as well as with distinguished jurists around the world, constructing a network of like-minded leaders who can work together to support the judiciary, address challenges to judicial independence, expand public awareness of the role of the courts, and improve the administration of justice — all in efforts to strengthen the rule of law; and

WHEREAS, David has helped to establish in the Bolch Prize for the Rule of Law an award of the utmost stature and renown and a mechanism by which the hard work of protecting the rule of law might be celebrated, and that in honoring the prize’s first five recipients — U.S. Supreme Court Justice Anthony M. Kennedy, Deputy Chief Justice Dikgang Moseneke of the Constitutional Court of South Africa, Massachusetts Supreme Judicial Court Chief Justice Margaret Marshall; Chief Judge Emeritus Clifford J. Wallace of the U.S. Court of Appeals for the Ninth Circuit, and the International Association of Women Judges — he has set a towering ideal to which all judges might aspire; and

WHEREAS, David has led the Bolch Judicial Institute with utmost devotion to the principles of impartiality and equanimity that all judges must uphold, even during a period of extreme partisanship and divisiveness that has left no public institution unscathed; and

WHEREAS, David has also touched so many of those with whom he has worked with his keen intellect and wisdom and his sincere care for people; and

WHEREAS, David has guided, mentored, cajoled, led, helped, and inspired so many of us, and so many others, to not only believe in the mission of the Bolch Judicial Institute but to also devote our own time, resources, connections, energy, and creativity in furtherance of the Institute’s lofty and vital goals; and

WHEREAS, though we know we cannot replace David’s unique leadership, we can ourselves commit to continue to learn from and emulate the example he has offered, to build upon the foundation he has laid, and to honor his dedication to the Bolch Judicial Institute by continuing to advance its mission; and

WHEREAS, David has now completed a five-year term as the Levi Family Professor of Law and Judicial Studies and Director of the Bolch Judicial Institute at Duke Law School;

THEREFORE BE IT RESOLVED that the members of the Bolch Judicial Institute Advisory Board acknowledge their gratitude and admiration for David’s leadership and service by appointing him Director Emeritus, effective January 1, 2023; and

BE IT FURTHER RESOLVED that the Board expresses its hope that David will continue to be involved with the Institute, lending his wise counsel as an emeritus member of the board and through participation as he sees fit in programs, events, and publications for many years to come.

Approved by the Advisory Board of the Bolch Judicial Institute on December 14, 2022.