You are here: Home » Raphael Lemkin Rule of Law Guardians 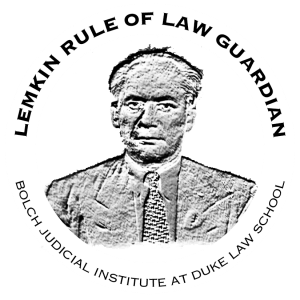 Throughout history and around the world, remarkable individuals have taken steps both large and small to protect and advance the rule of law. Lawyers who fight for justice for clients, judges who follow the law even when it defies popular opinion, individual men and women who, despite great personal risks, stand up for due process and for legal systems that treat all people with fairness and dignity — these everyday heroes are guardians of the rule of law who ensure the functioning of democracy and protect human rights. The Lemkin Rule of Law Guardian program honors these remarkable individuals through events and personal interviews that share their stories and remind us all of the power of an individual to make a difference.

The Lemkin Rule of Law Guardian series is named for Raphael Lemkin, one of the leading scholars of human rights of the 20th century. A Polish scholar and lawyer, Lemkin dedicated his life to the study of war crimes and advocated for the use of criminal law to defend peace and prosecute crimes against humanity. He developed both the term and the concept of genocide and in doing so shed light on the insidious practice of systematic elimination of entire cultures and peoples. He came to the United States during WWII as a refugee and joined the Duke Law faculty at the invitation of Duke Law Professor Malcom McDermott, with whom Lemkin had worked on scholarly projects. Lemkin was named a consultant to the U.S. Board of Economic Warfare and Foreign Economic Administration and later became a special adviser on foreign affairs to the War Department, largely due to his expertise in international law. In 1948 he succeeded in securing the passage of the Genocide Convention at the United Nations, which obligated member states to bring crimes of genocide in neighboring nations to trial. Learn more about Raphael Lemkin here.

Benjamin B. Ferencz was born in 1920 in Transylvania (then part of Hungary, now a region in Romania). When he was 10 months old, his family moved to New York City to escape religious persecution. He became deeply interested in issues of peace and justice at a young age and studied crime prevention at City College of New York. After graduating from Harvard Law School in 1943, he joined the U.S. Army and was assigned to the 115th AAA Gun Battalion, an anti-aircraft artillery unit that fought in many of the major campaigns in Europe. Then, as part of a newly created War Crimes branch, he assisted in collecting evidence for the prosecution of such crimes and visited several concentration camps, an experience he later described as having “peered into Hell.”

After he was honorably discharged from the Army in 1945, he was recruited to assist in the Nuremberg Trials, prosecuting war crimes perpetrated by the Nazis. He became chief prosecutor for the United States in the Einsatzgruppen Case, “the biggest murder trial in history” according to the Associated Press. Twenty-two defendants were charged with the murder of more than one million people; all were convicted and 13 were sentenced to death. Ferencz later assisted in reparation and rehabilitation efforts for the victims of Nazi crimes, participated in negotiations that led to the Reparations Agreement between Israel and West Germany and the first German Restitution Law in 1953, and then entered into private law practice in the United States.

He has published several books, including Defining International Aggression-The Search for World Peace (1975), An International Criminal Court-A Step Toward World Peace (1980), and Enforcing International Law-A Way to World Peace (1985), and has worked with the International Criminal Court and served as an adjunct professor at Pace University in New York. In 2009, Ferencz was awarded the Erasmus Prize, in recognition of notable contributions to European culture, society, or social science. In April 2017, The Hague renamed a footpath next to the Peace Palace as the Benjamin Ferenczpad (Benjamin Ferencz path), calling him “one of the figureheads of international justice.” Ferencz also is the subject of a documentary, Prosecuting Evil, by director Barry Avrich (available on Netflix). Learn more about Ferencz’s life and work on his website, benferencz.org.

Ferencz joined Bolch Judicial Institute Director David F. Levi and moderator Michael P. Scharf for a live interview on Oct. 12, 2020. The program was recorded and is available on YouTube.

Do you know a guardian of the rule of law?

Nominations should clearly explain how the nominee has helped to advance, protect, or develop the rule of law. We welcome nominees from all countries; posthumous awards will be considered. Letters should include or provide links to documentation of the nominee's work and activities and at least two other references who will second the nomination.