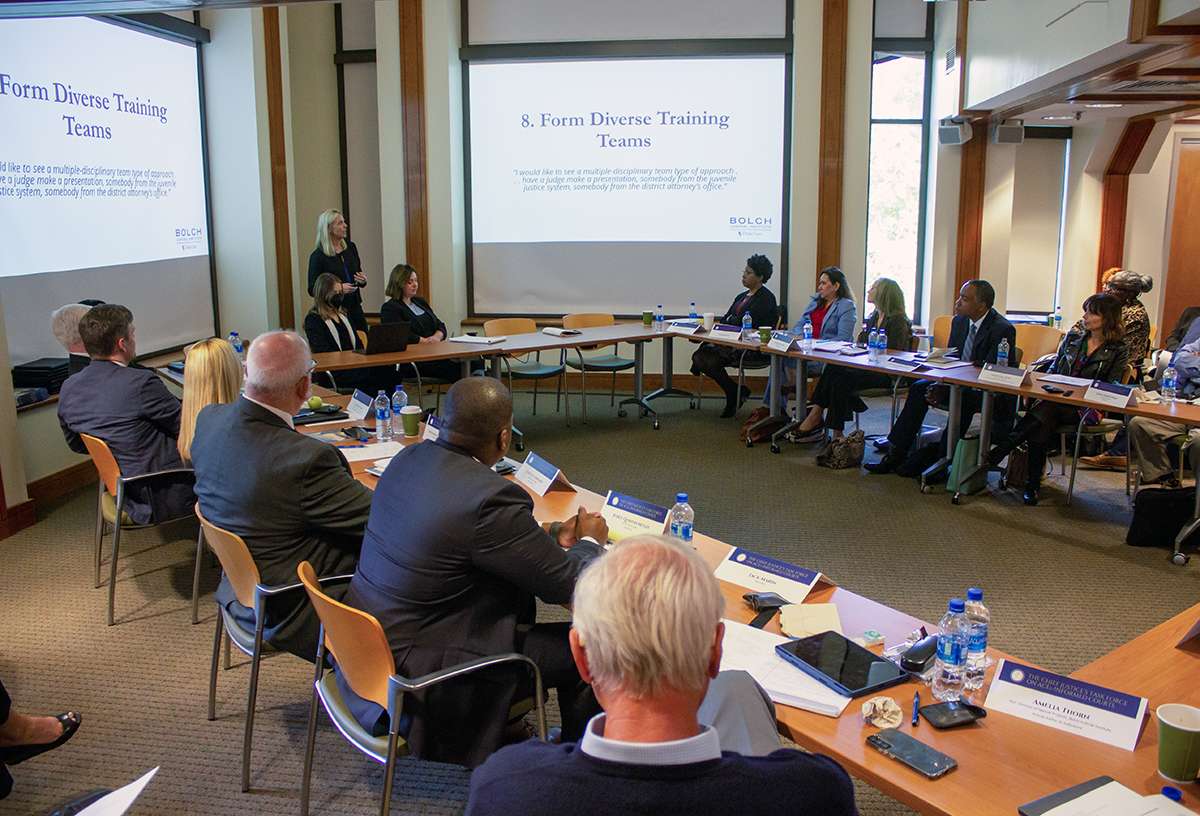 As the academic leader of the N.C. Chief Justice’s Task Force on ACEs-Informed Courts, the Bolch Judicial Institute of Duke Law is moving forward with plans to scale its trauma-informed courts curriculum by offering it to newly elected and appointed judges in North Carolina.

In July, the North Carolina Administrative Office of the Courts’ (NCAOC) education committee approved a provisional plan for the Bolch Judicial Institute to offer an educational program on the effects of trauma to all new judges beginning in summer 2023. A full day of programming — on the brain science of trauma, statewide cross-sector efforts to increase trauma-informed practices, and practical tips on how to create more trauma-informed courtrooms — will become part of the required curriculum for new judges orientation, beginning with the N.C. District Court Judges’ annual conference. 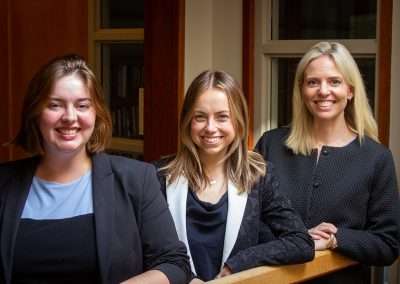 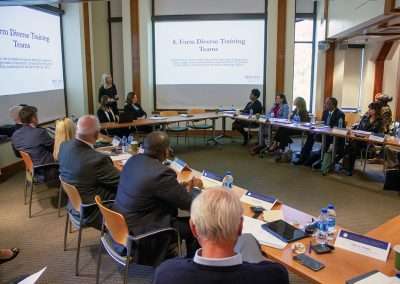 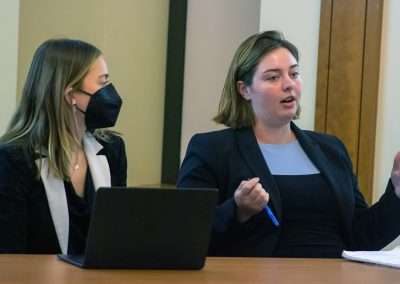 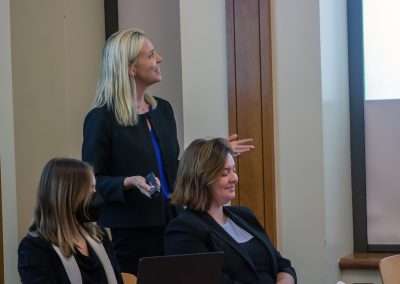 “The Chief Justice’s Task Force seeks to set the national standard on how to educate the entire judicial system, and the public, on trauma-informed practices,” said Mike Silver, the Training and Services Director of the NCAOC.

“The Administrative Office of the Courts is excited to partner with leaders in legal academia, health education, trauma-informed practices, philanthropy, and judicial branch stakeholders including clerks, judges, district attorneys, public defenders, and court program personnel to accomplish our goal of making our courts more trauma-informed.”

Understanding the Impact of Trauma

The Bolch Judicial Institute’s trauma education program aims to help educate judges about the impacts of adverse childhood experiences (ACEs) and offer tools for helping judges translate trauma knowledge into practices that better serve people who are involved in the justice system. By developing educational programs for judges and conducting research measuring the effects of trauma-informed courtroom practices, the Institute hopes to support North Carolina courts in achieving the ACEs Task Force’s goals and to improve courtroom experiences for North Carolina citizens.

The economic and social costs of ACEs have been studied since the 1990s, beginning with the groundbreaking CDC-Kaiser Permanente ACE Study, which found an association between traumatic experiences and poor healthcare outcomes. Research has similarly shown that exposure to trauma makes people more likely to enter the court system, and failure to effectively address trauma makes it harder to exit. Trauma changes the brain, increasing activity in the amygdala (which controls the fight or flight response) while suppressing development of the pre-frontal cortex (which governs impulse control and future planning). These changes leave traumatized people susceptible to risky and aggressive behavior: Up to 90% of juvenile offenders and 75% of adult offenders in the U.S. report at least one traumatic event early in life.

Despite recent efforts to implement trauma-informed practices in the judicial context, little research has investigated their impact. Extant research has focused on the impact of trauma-focused therapies for individuals who are justice-involved, showing effects such as a reduction in violent behavior. However, the extent to which positive impacts may arise from courtroom-based practices is not yet known. This is a gap the Institute is working to address with a new research agenda.

In 2021, the Institute provided a pilot trauma education program to a group of North Carolina district judges. Participants heard presentations on three topics: the science of trauma; the trauma movement in North Carolina; and applying trauma skills from the bench. Presenters included judges and trauma experts. Immediately following the pilot, Eva McKinsey, Ph.D., led a feedback session to hear judges’ reactions to the training. She and Amelia Ashton Thorn, the Bolch Judicial Institute’s Director of Special Projects and creator of the pilot course, also conducted in-depth follow-up interviews three months later with participating judges to assess the impact of the training. With help from a team of NC State undergraduate students, McKinsey analyzed both sets of feedback to glean 11 essential recommendations for future trauma education programs. The results of their analysis are published in the latest edition of Judicature, a scholarly journal also published by the Bolch Judicial Institute of Duke Law.

In addition to providing feedback to improve the training sessions, the judges also pointed toward the need for new research.

“Following the pilot training program, it became clear that the judges are looking for evidence that trauma education and restructuring their courtroom to align with trauma-informed principles actually works,” McKinsey said. “Currently, there is almost no scholarship looking at this specific question: What are the impacts of trauma-informed practices in the courtroom?”

That question prompted McKinsey and Thorn to apply for a Duke University Bass Connections research grant. The grant was approved in March 2022. As a result, through the 2022–23 academic year, a Bass Connections project team of undergraduate and graduate students will collect data for a novel empirical research study on the real-world impacts of trauma-informed courtroom-based practices.

“We were thrilled to have so many outstanding members of the Duke student community — undergrads, graduate students, and professors alike — join this groundbreaking research team,” Thorn said. “We are eager to find empirical answers to judges’ questions about how to effectively interact with the citizens who pass through the courthouse doors — questions that go to the heart of our mission at Bolch, which is to promote rule of law principles through scholarship.”

Another major milestone of the Chief Justice’s ACEs taskforce has been the creation and distribution of an ACEs-Informed Courts Bench Card to all North Carolina prosecutors and judges. The trauma education subcommittee of the taskforce, led by Thorn, created the bench card with input from trauma education leaders, including the National Child Traumatic Stress Network (co-led by Duke) and judges who shared their own trauma-informed practices. The bench card delivers an abbreviated version of the trauma-informed courts curriculum, along with simple, cost-free recommendations for how judges can make their courts more trauma-responsive. For example, the card includes advice on docket scheduling, de-escalation, transparency, and communication, as well as some recommendations tailored specifically to interacting with children in the courtroom.

“The bench card was truly a team effort between Task Force leaders, academics, doctors, and judges,” Thorn said. “It reflects some of the current best practices in trauma-informed judging. We hope it will serve as a helpful resource that judges can keep on hand in court — ultimately benefitting court-users and judges alike.”

An Eye to the Future

The Bolch Judicial Institute’s trauma-informed courts initiative is funded in-part through a gift from the HopeStar Foundation (formerly the Winer Family Foundation), a Charlotte-based nonprofit that supports initiatives focused on the health and development of children and families. Elizabeth H. Star, founder and president of the foundation, said that the program underscores her foundation’s mission to improve the health and wellbeing of families in the North Carolina, while also developing a national model for other states to expand upon. The Institute often fields requests from other states for input into their own court trainings and curricula.

“The Bolch Judicial Institute is becoming a leader in this area. Once we finish this embedment of the trauma-informed courts program, this will be a national model,” Star said. “Then, in partnership with the Institute, the HopeStar Foundation wants to expand this program nationwide. We want to take it to other states, so that their court leadership and chief justices can leverage this research and expand the curriculum within their individual states.”

The Bolch Judicial Institute is grateful for the continued partnership and support to the trauma initiative from the HopeStar Foundation, the Kellen Foundation, Stanley A. Star (JD’61) and Elizabeth Star, Peter Kahn (JD’76) of Williams & Connolly LLP, John “Buddy” Wester (JD’72) of Robinson Bradshaw, and Russell Robinson (BA’54, LLB’56) and Sally Robinson (BA’55).

To learn how you can get involved, subscribe to receive email updates or email us at bolchjudicialinstitute@law.duke.edu.