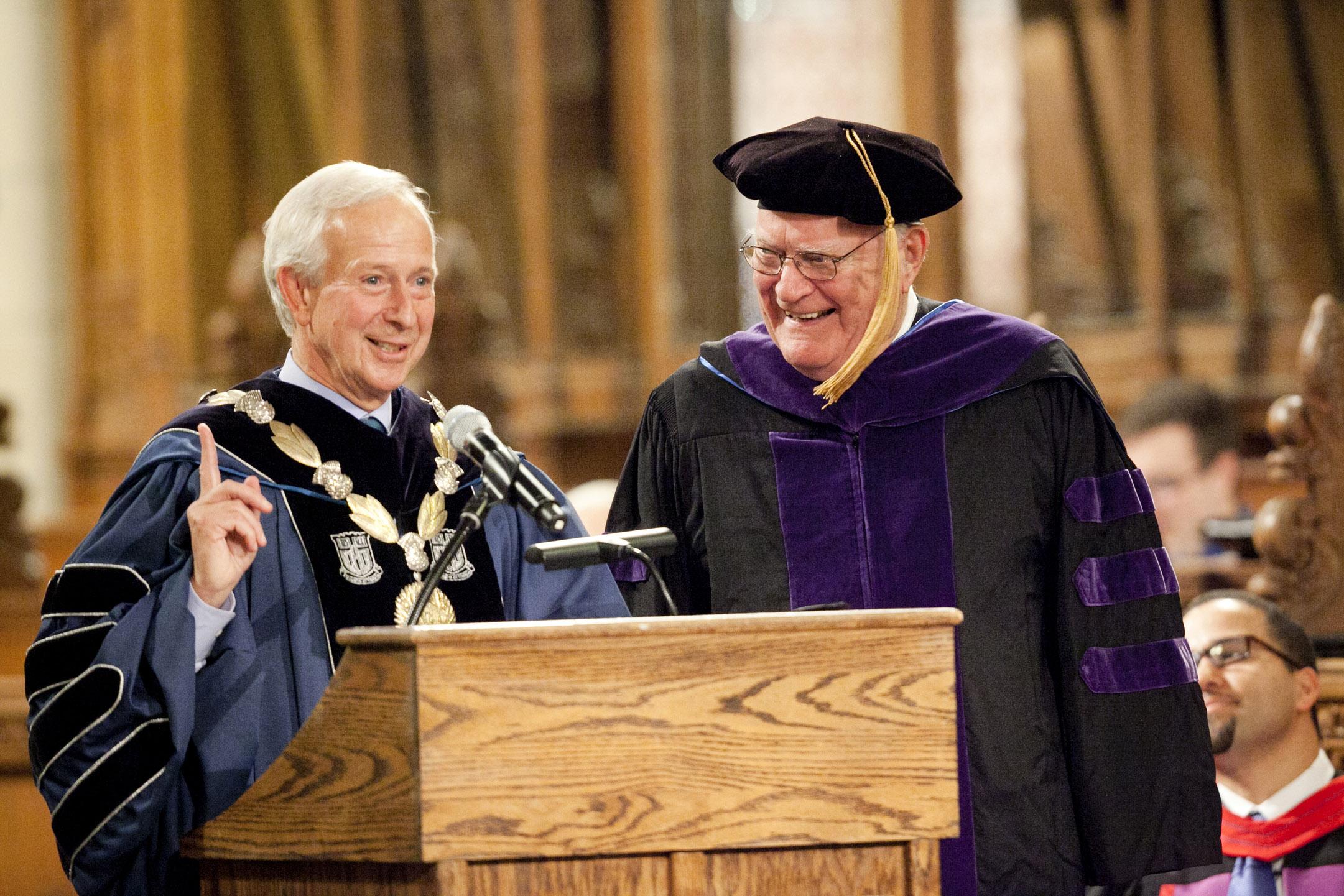 Senior U.S. Circuit Judge Gerald B. Tjoflat of the United States Court of Appeals for the Eleventh Circuit will visit Duke Law School in early April and will participate in programs as part of the Bolch Judicial Institute’s Distinguished Judge in Residence program.

As part of his residency, Judge Tjoflat will meet and talk with students about clerkships. On April 7, 2022, Judge Tjoflat will participate in a lunchtime conversation with David F. Levi, director of the Bolch Judicial Institute, about his life in the law and his lifelong involvement with and loyalty to Duke, as a student, board member, and mentor to more than 100 Duke Law clerks. The event is being recorded as part of a larger oral history project to be archived at Duke Law School.

“It is such an honor to welcome Judge Tjoflat as our Distinguished Judge in Residence,” said David F. Levi, director of the Bolch Judicial Institute. “In addition to his more than 50 years of service on the bench, Judge Tjoflat has been a major supporter of Duke Law and is passionate about helping students who are at the beginning of their legal careers. We are so grateful to Judge Tjoflat for making the trip to Durham; it seems so right that he will be our first in-person distinguished guest judge since the beginning of the pandemic.”

Judge Tjoflat has served as a federal judge for more than 50 years. He first entered federal judicial service in 1970 when he was confirmed to the U.S. District Court for the Middle District of Florida. In 1975, he was confirmed to the U.S. Court of Appeals for the Fifth Circuit, and then in 1981, he was among the first judges assigned to the newly created U.S. Court of Appeals for the Eleventh Circuit. He served as Chief Judge of the Eleventh Circuit from 1989 to 1996 and assumed senior status in 2019. In addition to his judicial service, has served on numerous boards, judicial conferences, and committees and is an honorary life member of the Duke Law School Board of Visitors.

In a recent edition of Judicature, Chief U.S. District Judge Timothy J. Corrigan of the Middle District of Florida, himself a Duke Law graduate and former clerk of Judge Tjoflat, wrote a tribute “The ‘Duke’ of the Federal Court.” In the article, Judge Corrigan describes Judge Tjoflat’s rise to the bench, landmark rulings, and above all, his unwavering devotion to Duke and his law clerks.

“I have tried to take the lessons that the Judge taught me while clerking and which he teaches through his opinions — respect for the law, rigorous attention to detail, fierce independence, professionalism, and collegiality in the practice of law — and apply them in my professional life as a lawyer and a judge,” Judge Corrigan writes. “Judge Tjoflat has been imparting these lessons for 50 years, and there is no end in sight. […] From his unusual name, to his extraordinary intellect, to his unparalleled love for the law, to the unique way he can deconstruct a problem — ‘strip it bare,’ as he calls it — to his many quirks, there’s no one quite like the Hon. Gerald Bard Tjoflat.”

Learn more about the Bolch Judicial Institute Distinguished Judge in Residence Program here. To receive updates about this and other programs, please subscribe to our email list.