Bolch Prize awarded to a “collaborator, a helper” 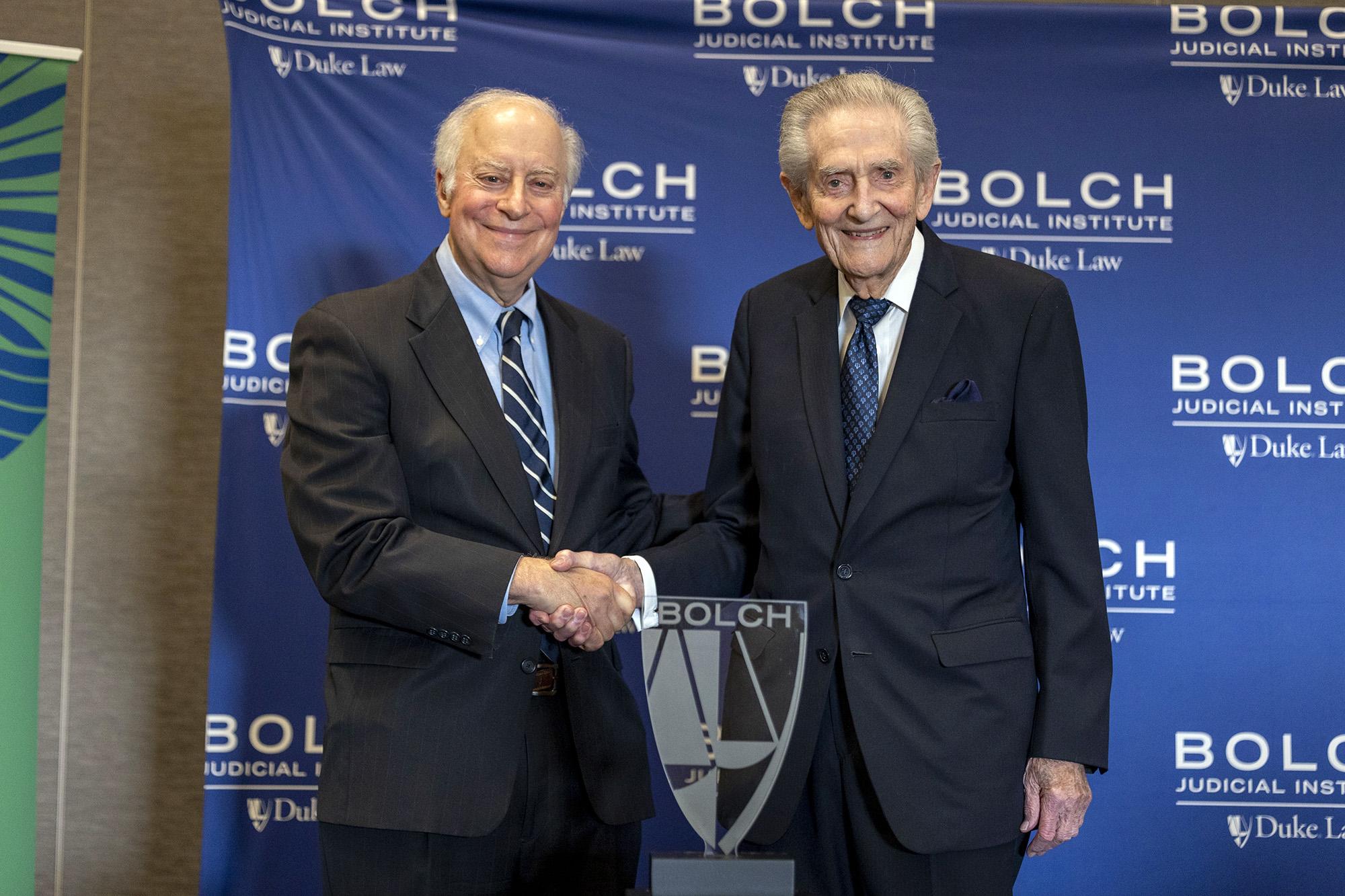 The Hon. J. Clifford Wallace, chief judge emeritus of the U.S. Court of Appeals for the Ninth Circuit, received the 2022 Bolch Prize for the Rule of Law during a ceremony in San Diego, Calif., on Friday, March 18.

The ceremony featured remarks from several distinguished speakers, including colleagues from the J. Clifford Wallace Inn of Court, who paid tribute to Judge Wallace’s tireless service to the courts and to the rule of law. Through more than 50 years of service as a federal judge, Judge Wallace has led multiple efforts to improve the administration of justice in his circuit and in the federal courts, served his community and church through a wide variety of leadership roles, and advised judiciaries around the world on the development of the rule of law and the administration of justice. Through travel to more than 70 countries, often at his own expense, Judge Wallace has worked with judges and governments to strengthen judicial processes, improve court structures, and develop innovative solutions to logistical and legal challenges. Read more about Judge Wallace here.

Susan Bass Bolch, founder of the Bolch Judicial Institute, opened the prize ceremony, congratulating Judge Wallace and thanking him for a remarkable life and career dedicated to preserving and advancing the rule of law.

“Through teaching and listening, collaboration and partnership, Judge Wallace has helped judges and judiciaries across the globe improve the administration of justice and ensure the efficient and fair resolution of disputes,” she said. “And when courts work effectively, fairly, and dependably, they earn the faith of the citizens upon whom the rule of law depends. Judge Wallace’s work is the very sort of work we hoped our Institute would support. By honoring you, Judge Wallace, we not only thank you and celebrate your many achievements, we also lift you up as a shining example. You show us the difference that one very dedicated person can make.” 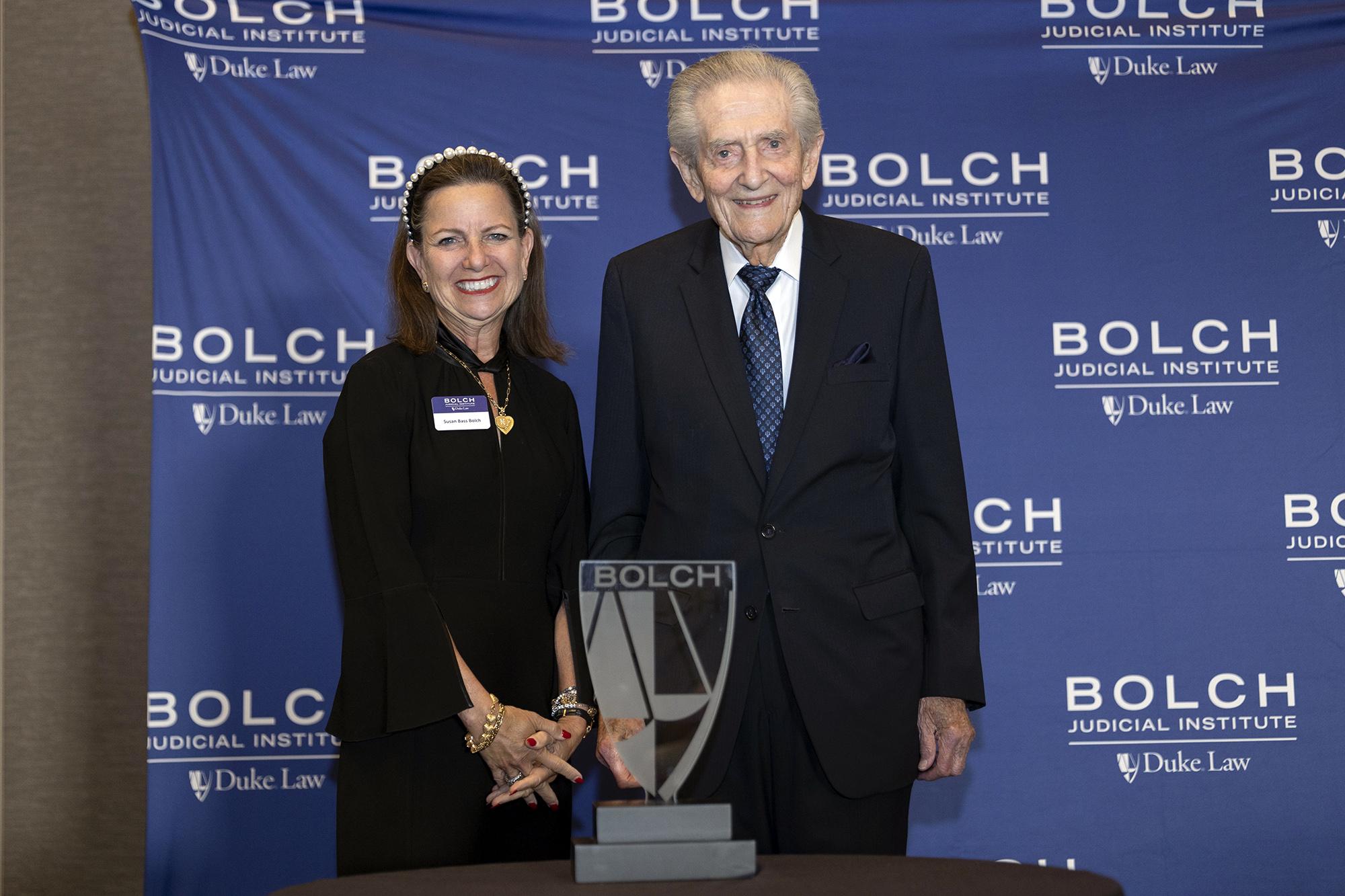 Susan Bass Bolch with Judge J. Clifford Wallace of the U.S. Court of Appeals for the Ninth Circuit. (Photo by True Photography)

Other speakers, including Judge M. Margaret McKeown of the U.S. Court of Appeals for the Ninth Circuit and Judge David Campbell of the U.S. District Court for the District of Arizona, offered highlights from Judge Wallace’s long career. McKeown cited the many committees and commissions Wallace has chaired or served on to help improve the administration of justice in the U.S. federal courts. Judge Campbell spoke about Judge Wallace’s international work, saying that his efforts to assist judiciaries around the world, from China and Pakistan to Uganda and Russia, often take many years to yield results — but that when they do, the benefits to the society served by those courts are enormous.

“Cliff has always been focused on the fact that the rule of law is ultimately not just something for lawyers, it’s actually something for people who need justice,” said Singapore Supreme Court Chief Justice Sundaresh Menon by video. “You can have the best system in the world, but if you can’t access it because it is too arcane or too alien in any of a number of ways, it just remains a theoretical construct. Cliff’s work has focused on getting this message across to judges, and in particular, to chief justices, who, as people who head judiciaries, have the opportunity to shape their systems in such a way that they can actually take steps to deliver the values by implementing policy changes. I can’t think of a better recipient of this prize.”

Manuel Sager, a former ambassador to the United States from Switzerland and a member of the Bolch Judicial Institute’s advisory board, put Judge Wallace’s work in courts in a broader context. “I see behind these objectives one overarching objective: to restore a broken bond between governing and the governed, to restore trust by restoring justice,” he said. “Justice and trust are two indispensable ingredients of a functioning society and a viable democracy. Judge Wallace’s aim has been to transform societies in their foundations, always with one eye on the courthouse and one eye on the main square.”

D. Todd Christofferson, a leader of The Church of Jesus Christ of Latter-day Saints and a 1972 graduate of Duke Law School, spoke about the guiding influence of Judge Wallace’s religious faith on his professional and personal life. Judge Wallace has abided by his church’s precepts, he said, which encourage followers to “act by persuasion and with genuine love and regard for others rather than by exercising whatever authority we may have to impose our will.”

“This is Cliff’s modus operandi,” Christofferson said. “There is no question about his commitment or how much he cares. But he never tries to force a proposal or a solution. He knows that for anything good to endure, the beneficiaries have to buy into it; they have to own it. Therefore, he appeals to the innate goodness in all of us, and with a smile, persuades us that we can do better and follow the better path.” 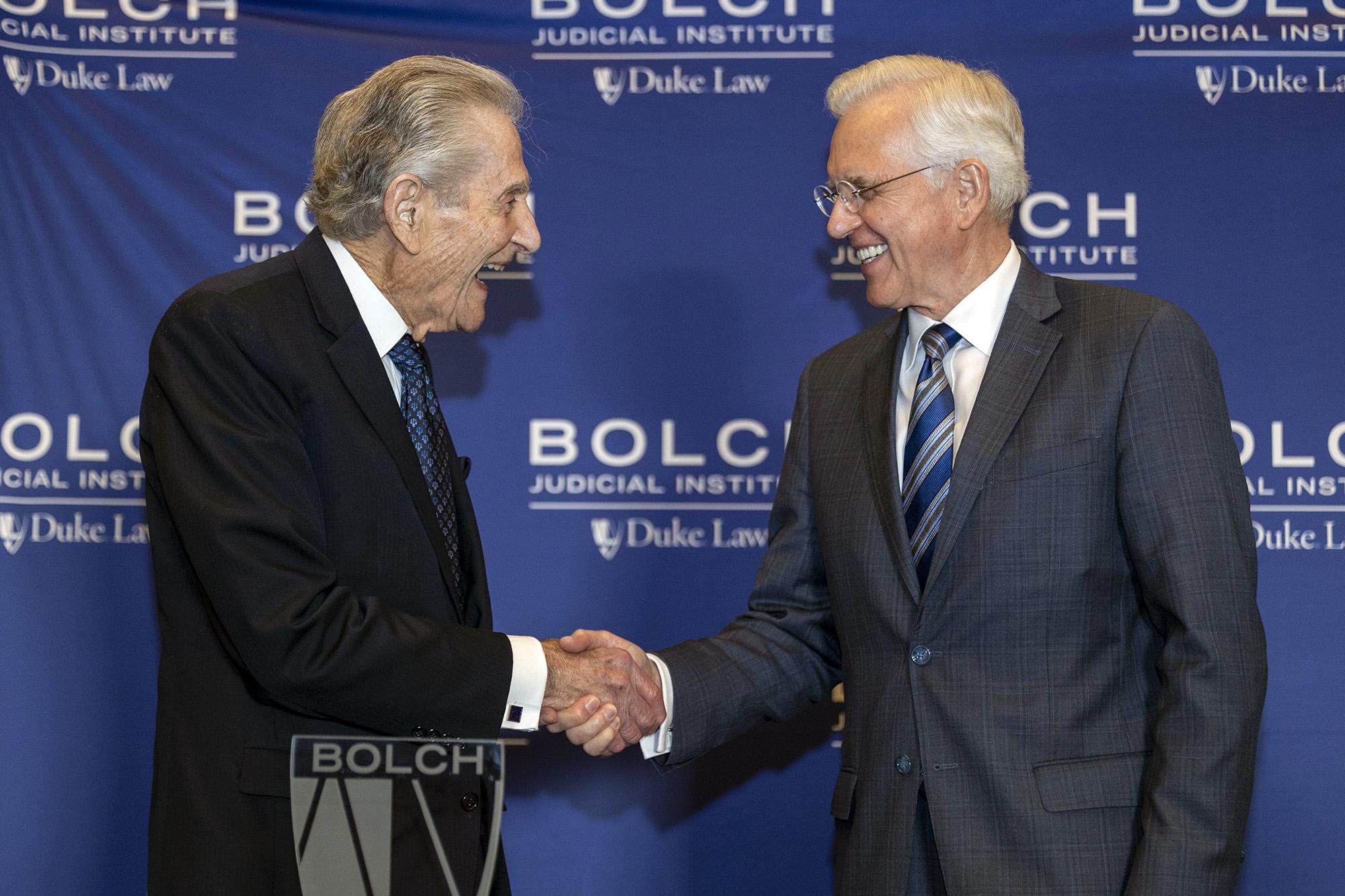 D. Todd Christofferson, a leader of the Church of Jesus Christ of Latter-day Saints and a 1972 graduate of Duke Law School, congratulates Judge Wallace. (Photo by True Photography)

Many speakers emphasized that Judge Wallace’s collaborative approach is the very reason he’s been so effective in his efforts to improve courts and judicial systems in so many places, with such varied partners.

“I think one of the reasons you have been able to do so much, and to do it so effectively, is because of who you are and the way you carry yourself in the world,” said David F. Levi, director of the Bolch Judicial Institute and a former U.S. District Judge of the Eastern District of California, where he was a colleague of Judge Wallace’s. “You are a collaborator, a helper. You share ideas, and you learn from others as much as they might learn from you. Not every country you have worked in has embraced democracy or human rights in all the ways you would like. But you meet these challenges with the same hope you bring to all your work: that your efforts may improve a process or a system that will better the experiences of everyday people who are seeking solutions to problems. And this, in turn, will improve relationships in a community, increase public faith in the judicial process, and strengthen the social fabric. These are the building blocks, the ground game of the rule of law.”

David F. Levi with Judge J. Clifford Wallace, 2022 recipient of the Bolch Prize for the Rule of Law. (Photo by True Photography)

Judge Wallace said he has focused his life’s work on strengthening the rule of law because it offers “the hope of fundamental fairness, distinguished from a rule developed by an individual such as a political executive or some other person in power.” But, he said, the rule of law cannot be effective in countries that do not have a separate, independent judicial system to enforce laws. “However well-intentioned each country’s constitution and declarations may be, the judiciary must be strong enough to implement the rule of law. It was this realization that started me on the path 50 years ago, of strengthening judiciaries worldwide, so that the rule of law could be implemented. My five decades with this effort has taught me that we will never finish with this project. There will always be more to be done, in some country somewhere, to strengthen a judiciary, so the judiciary in turn can protect the rule of law.” 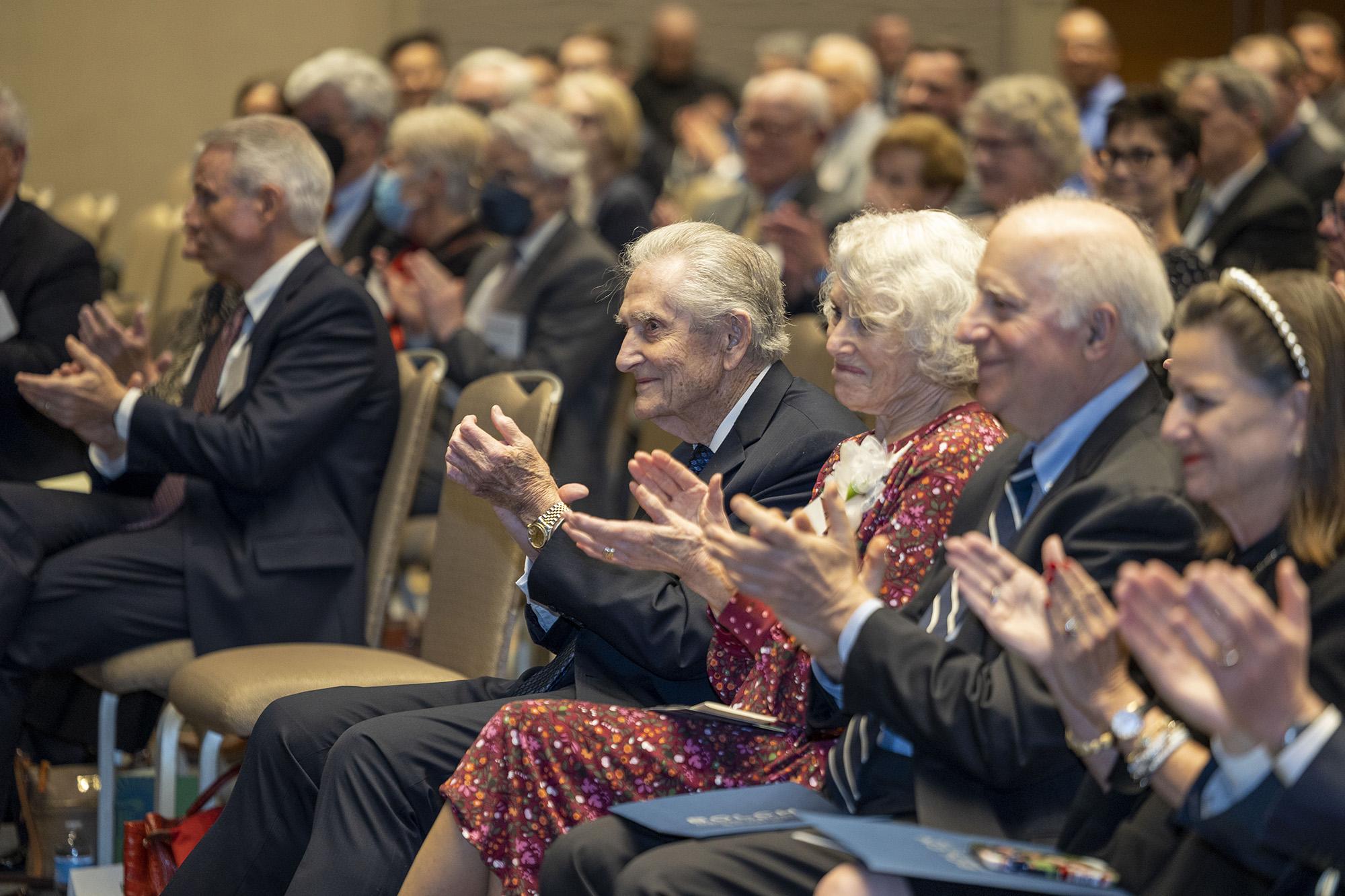 Judge Wallace and his wife, Jenee, clap during the ceremony held in his honor on March 18, 2022, in San Diego, Calif. (Photo by True Photography)

Learn more about the prize here. A video of the ceremony is available to watch anytime on Duke University’s YouTube channel.