First International Edition of Judicature to be Published Online 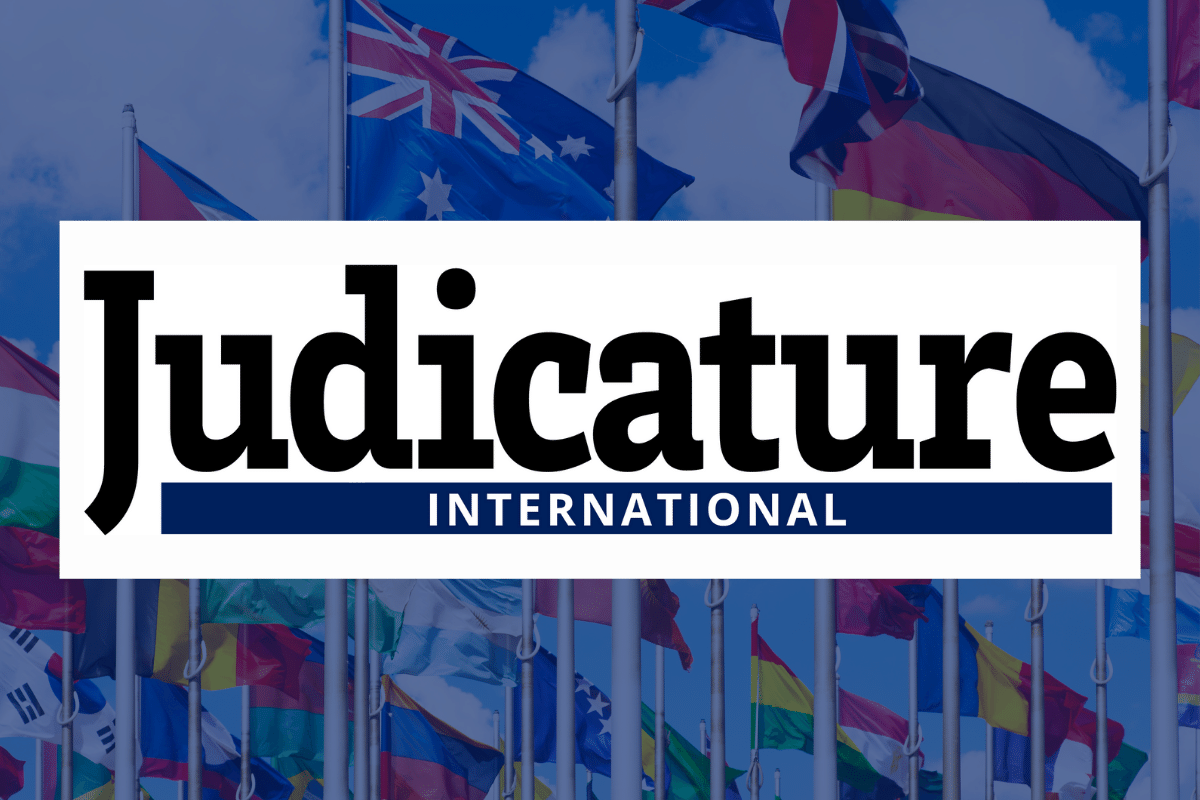 The Bolch Judicial Institute of Duke Law’s flagship journal Judicature has launched an online international edition, Judicature International, at http://judicature.duke.edu/intl. The journal will publish commentary, scholarship, empirical research, opinion, and other content exploring issues of common concern to judges around the world, including court administration, the rule of law, transnational law, and judicial independence.

David F. Levi, Judicature’s publisher and the director of the Bolch Judicial Institute at Duke Law School, has appointed a multinational editorial board to advise on the development of Judicature International. Chaired by Justice David Collins (Duke MJS’18) of the New Zealand Court of Appeal, the board includes judges, academics, and legal practitioners from around the world who will provide editorial guidance and feedback on submitted articles. Melinda Vaughn, managing editor of Judicature, will serve as managing editor for Judicature International. Jennifer Maher, associate dean emerita for international studies at Duke Law School, will serve as articles editor.

“One of the priorities for International Judicature will be to identify and publish articles that bolster the rule of law,” said Justice Collins. “In many countries, courts and judges serve as the last defense against corruption and repressive governmental actions. Their important work needs to be amplified, explained, and supported. And we need to remain vigilant about the rule of law. It is our hope that this journal can help create a community among judges who support each other in their judicial work and in advancing public understanding of the crucial role the judiciary plays in creating and strengthening strong and healthy societies.”

In its first edition, Judicature International includes “A Personal Journey Through the Rule of Law in the South Pacific,” by W K Hastings, a judge of the District Court of New Zealand who currently is serving as Chief Justice of Kiribati and President of its Court of Appeal. Other features include “China’s E-Justice Revolution,” by Zhuhao Wang. The journal will also periodically highlight news items about judges and judiciaries around the world.

Now in its 105th year of print publication, Judicature began as the journal of the American Judicature Society (AJS), which worked to advance the administration of justice, protect judicial independence, and reform judicial selection processes. Duke Law School took over the publication in 2015 after the national AJS organization dissolved (AJS’s Hawaii chapter has carried on some of the original membership programs). Now, the journal publishes scholarship, research, opinion, and perspectives on a broad range of topics relating to judges, the judiciary, and the administration of justice and mails three times a year to all U.S. federal judges and state supreme court justices, most state appellate judges, and others.

Judicature International will be a freely accessible online forum that explores topics of common interest to judges around the world and helps to foster a global judicial community. It also addresses growing interest among international readers who are already finding Judicature online. Since last year, judicature.duke.edu has seen a 430 percent increase among users outside the United States — including India, Canada, Australia, China, Nigeria, Germany, the Philippines, and Kenya — who are finding articles like Judicial Review & Parliamentary Supremacy, The Collapse of Judicial Independence in Poland, and China’s E-Justice Revolution.

At the same time, global interest in Duke Law’s Master of Judicial Studies program has dramatically increased even though the program only accepts two international students for each class.

“We are seeing increased demand for opportunities for judges from around the world to be in conversation with one another, to share ideas and knowledge and to address common challenges,” said Levi. “By providing a forum for these sorts of exchanges, International Judicature aims to strengthen the rule of law and advance a global judicial culture of shared commitment to the principles of judicial independence and the fair and efficient administration of justice. We hope the journal will also have a civic education component that can help build public understanding of the work and role of a judge and the value of an independent judiciary as well as increased awareness of threats to the rule of law around the world.”

Article submissions may be sent to judicature@law.duke.edu under Judicature’s submission guidelines. Submissions are reviewed by International Judicature staff and editorial board members.  To receive updates about this edition, subscribe for updates via email or follow us on Twitter @DukeJudicature.