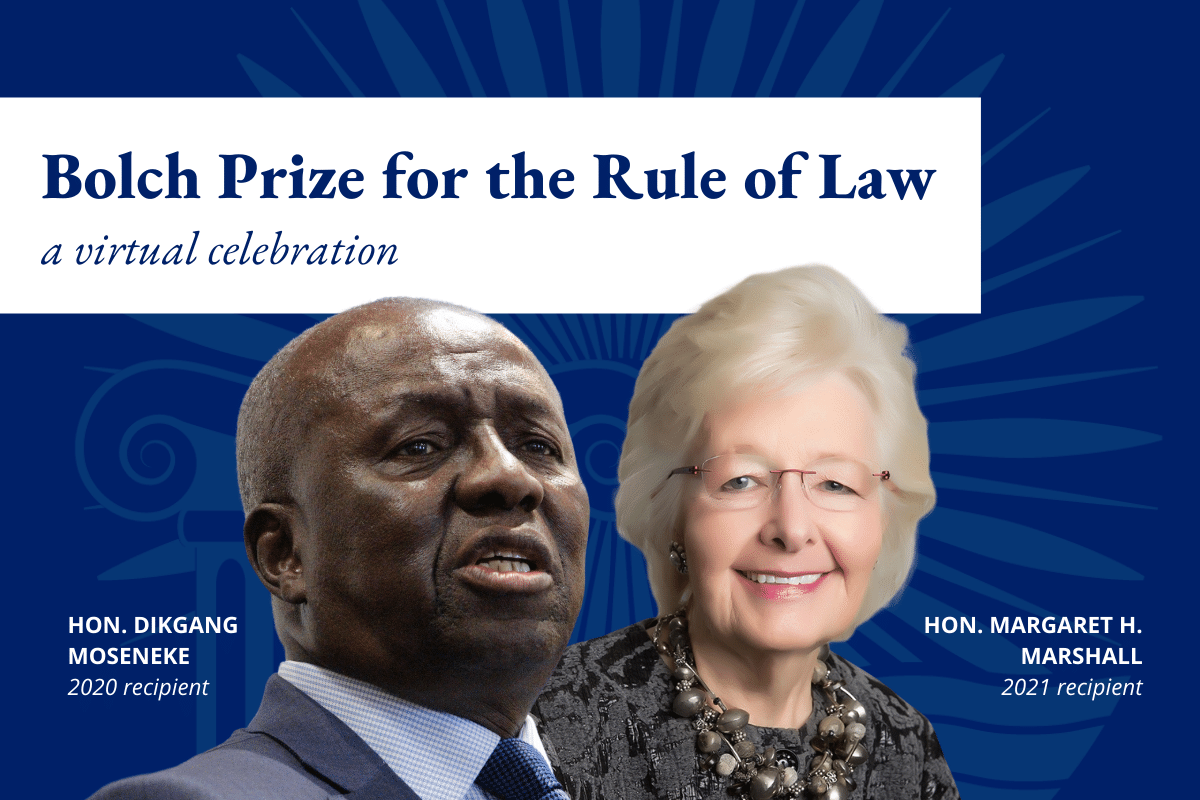 The Bolch Prize for the Rule of Law virtual celebration that premiered on June 30, 2021, is now available to watch anytime on Duke University’s YouTube channel. This 2021 ceremony honors two remarkable judges who, though both born in apartheid-era South Africa, had very different paths to the judiciary.

In the video, Deputy Chief Justice Dikgang Moseneke of the South Africa Constitutional Court (2020 prize recipient) and Chief Justice Margaret H. Marshall of the Massachusetts Supreme Judicial Court (2021 prize recipient) talk about the importance of the rule of law, human rights including LGBTQ+ rights, and how their different experiences growing up under apartheid informed their jurisprudence.

Chief Justice Marshall reflected on her court’s decision in the groundbreaking case Goodridge v. Department of Public Health, which made Massachusetts the first U.S. state court to legalize same-sex marriage.

“I have been asked whether my experience in South Africa, growing up as a white child in South Africa, informed my decision in any way,” she said. “I think I can fairly say that as I was reaching for the correct interpretation of the Massachusetts Constitution, I was not thinking about my experience in South Africa. But on reflection, I have come to understand one thing: It was so clear to me that everything that the government had been telling me as a white child — that black South Africans were not capable of and could not do, that they could not run a democracy, could not be brilliant lawyers, could not be successful businessman, could not be leading theorists — it was so patently wrong that I have often thought that when somebody tells me that the other is not capable of something or the other is different, or the other does not belong as a member of our society, there’s a deep-seated nerve that is triggered in my system that makes me think very, very deeply about whether that is the case.”

Deputy Chief Justice Moseneke noted that perhaps the most important work of the courts is the handling of day-to-day disputes and injustices that deeply affect people’s lives.

“When we talk about the rule of law we often talk about the higher, larger context, the super-structure of the democratic arrangements in a society,” he said. “But in the many years that I’ve been counsel and then a judge, there are so many disputes of people, of neighbors or spouses, of children. And ask anybody who has been in courts, those disputes require the law to step in and to restore the equilibrium that is brought on by an invasion of rights or perceived invasion of rights. And over the years I’ve built a certain level of sensitivity over the fact that the law serves a purpose much more than the big and powerful in society.”