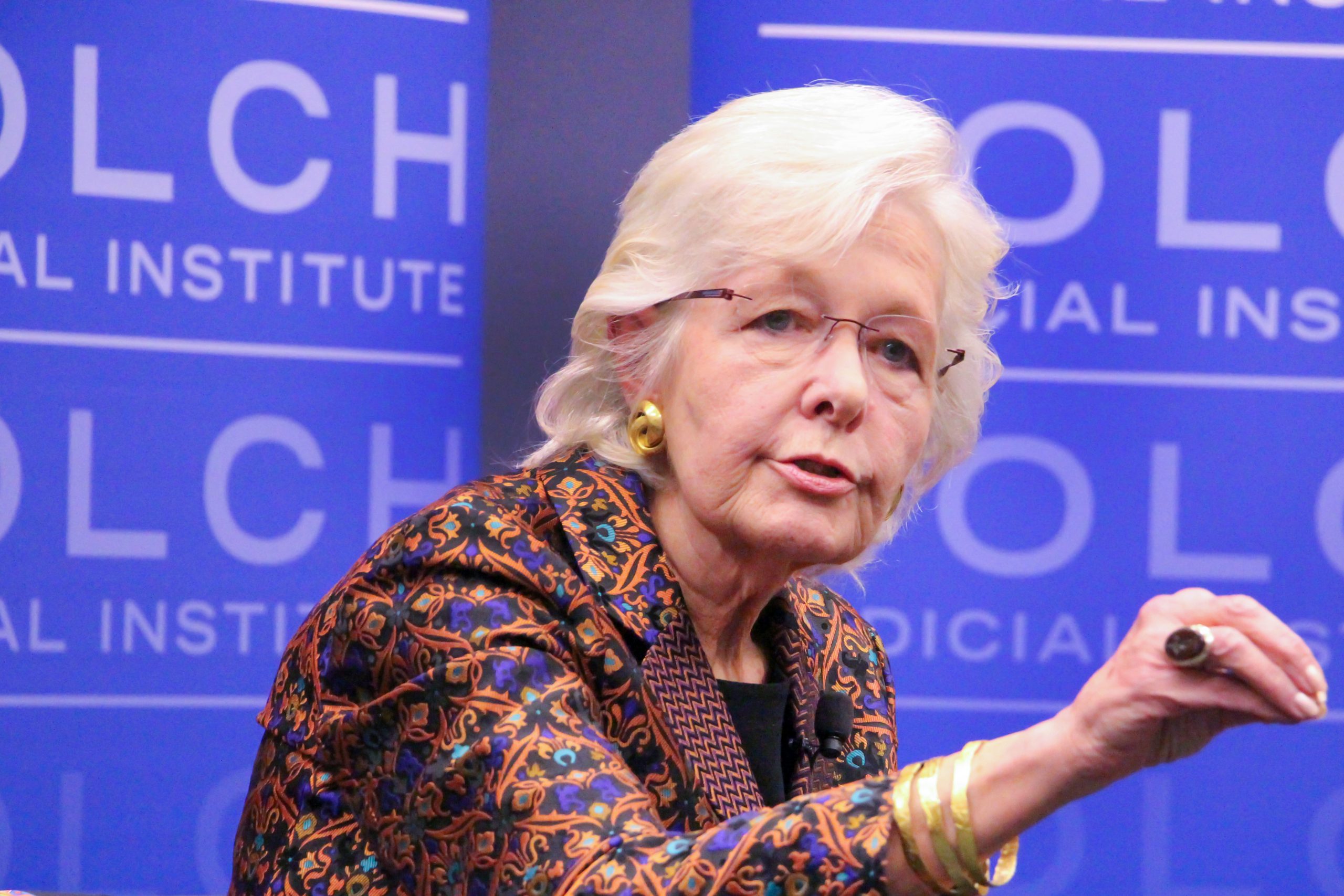 Retired Chief Justice Margaret H. Marshall — former chief justice of the Massachusetts Supreme Judicial Court and a lifelong advocate for a more transparent, efficient, and accountable judiciary — will receive the 2021 Bolch Prize for the Rule of Law.

From her anti-apartheid advocacy as a young adult in her native South Africa to her pathbreaking leadership as the first woman to serve as Massachusetts’ chief justice, to her steadfast commitment to ensuring equal justice for all before the law, Chief Justice Marshall has advocated for and defended the rule of law all her life.

“Chief Justice Marshall is an extraordinary example of someone who has quietly and persistently worked to uphold the rule of law,” said David F. Levi, director of the Bolch Judicial Institute at Duke Law School. “Having witnessed and fought against the devastating injustices of apartheid, she has a deep sense of the ways in which the law can be used either to undermine or to protect equal treatment. She has dedicated her life to ensuring that the law in substance and administration promotes justice for all. Her example on and off the bench has inspired judges and lawyers in this country and in South Africa.”

Chief Justice Marshall will be honored during a prize ceremony program to be broadcast online in June. Deputy Chief Justice Dikgang Moseneke of the Constitutional Court of South Africa, the recipient of the 2020 Bolch Prize, also will be honored during the broadcast. (The 2020 Bolch Prize ceremony honoring Justice Moseneke was canceled due to the outbreak of Covid-19.) Details about the program will be available later this spring.

“Having witnessed and fought against the devastating injustices of apartheid, she has a deep sense of the ways in which the law can be used either to undermine or to protect equal treatment.”

Before retiring as chief justice in 2010, Chief Justice Marshall wrote hundreds of opinions, including the groundbreaking 2003 decision in Goodridge v. Department of Public Health, which held that the Massachusetts Constitution prohibits the state from denying same-sex couples access to civil marriage. The opinion made Massachusetts the first state to legalize gay marriage and laid the groundwork for a sea change in attitudes and law across the United States.

“It was my distinct honor to appoint Margaret Marshall as a justice of the Supreme Judicial Court of Massachusetts, where she went on to be a great and long-serving chief justice — in fact, a breakthrough jurist on due process and equal protection issues specifically,” said Bill Weld, who served as governor of Massachusetts from 1990 to 1998 and appointed Marshall to the state’s high court in 1996.

A legacy of courage and determination

Born and raised in South Africa, Chief Justice Marshall obtained her baccalaureate from the University of the Witwatersrand in Johannesburg. While an undergraduate, she was elected president of the National Union of South African Students, at the time a leading anti-apartheid organization. As a student, she would attend the trials of political opponents of apartheid, to “bear witness” to the injustices they faced under a corrupt legal system. She helped provide transportation to families who visited loved ones incarcerated as political prisoners — many of whom, including Nelson Mandela and Dikgang Moseneke, were imprisoned for decades.

Chief Justice Marshall came to the United States in 1968 to pursue graduate studies at Harvard. Facing likely imprisonment for her anti-apartheid work were she to return to South Africa, she decided to stay in the United States. She became a U.S. citizen in 1978 and obtained a master’s degree from Harvard and a JD from Yale Law School.

Following her graduation, Chief Justice Marshall practiced law for 16 years in Boston and became a partner in the Boston firm of Choate, Hall & Stewart. In 1992, she was appointed vice president and general counsel of Harvard University, the first woman to hold that position. In 1996, Governor Weld named her an associate justice of the Supreme Judicial Court of Massachusetts, the oldest continuously serving appellate court in the Western Hemisphere; in 1999 she became the first woman to serve as chief justice of that court. 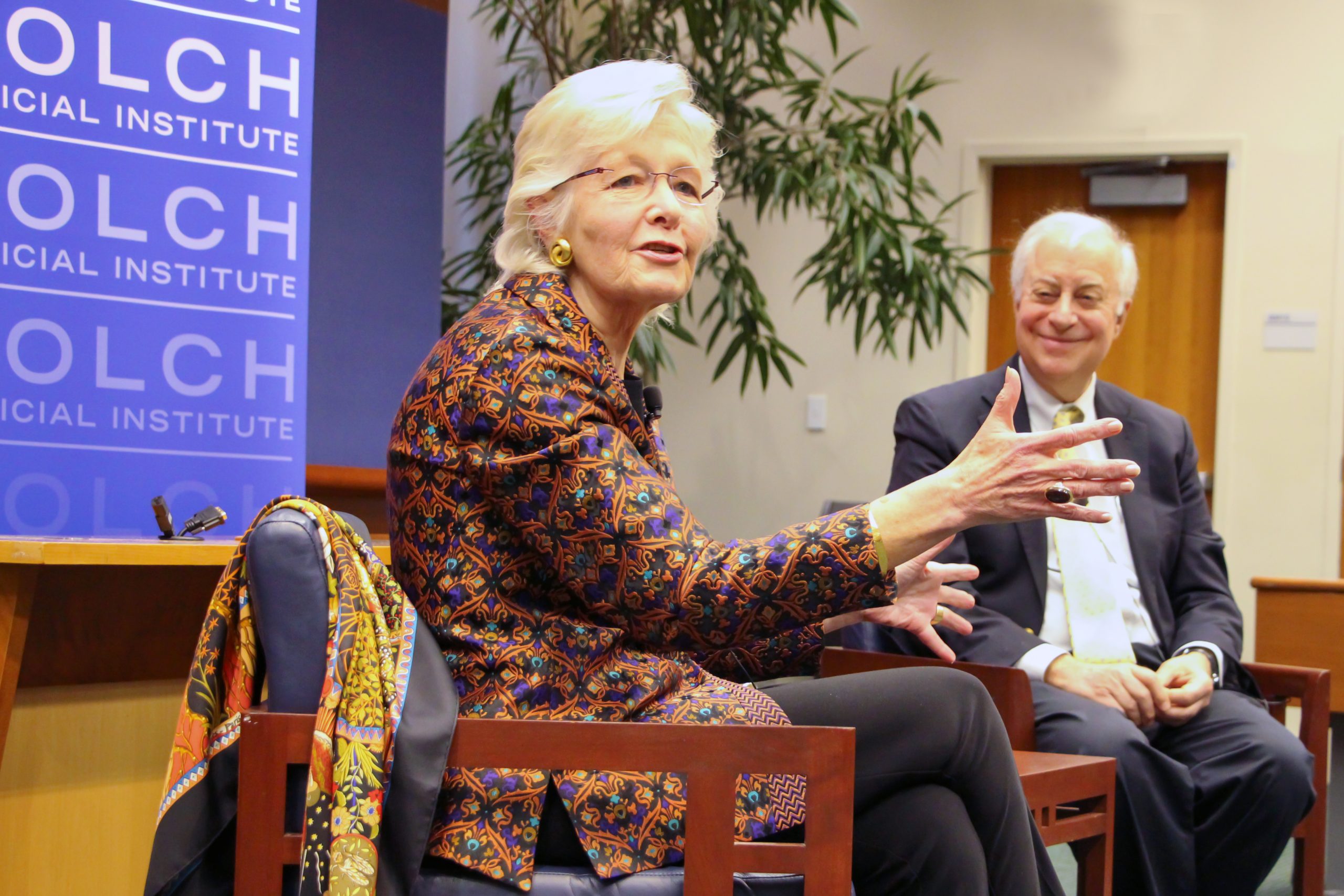 The appointment had particular meaning for Chief Justice Marshall, as she explained during a 2019 Judgment Calls podcast with Director Levi. Since her youth in South Africa, she had revered the Supreme Judicial Court of Massachusetts for its early stance against slavery:

There were two decisions from the United States of which I, as a student involved in anti-apartheid activities, was aware. The first was, not surprisingly, Brown vs. Board of Education. . . .  The [second, a] Massachusetts case decided in 1783, was a case decided under the new, then very new, Massachusetts Constitution, which predates the federal Constitution.

For that reason, the Supreme Judicial Court had always been a revered institution for me. Yes, I had appeared as a lawyer in the Court. But that wasn’t the reason why I agreed to be considered for appointment to the Court. It was because of its great history, outlawing slavery. It is one of the first cases that, as a matter of law, as a matter of equality, as a matter of legal principle, said slavery is inconsistent with the objective of equality and dignity for all.

In writing the decision to legalize same-sex marriage in Massachusetts, Chief Justice Marshall drew again on the Massachusetts Constitution’s objective of equality and dignity for all. “Barred access to the protections, benefits and obligations of civil marriage, a person who enters into an intimate, exclusive union with another of the same sex is arbitrarily deprived of membership in one of our community’s most rewarding and cherished institutions,” she wrote in Goodridge v. Department of Public Health in 2003. “That exclusion is incompatible with the constitutional principles of respect for individual autonomy and equality under the law.”

“As a proudly gay man, I can never forget the awed admiration I felt when, for a sharply divided court, she handed down her eloquent judicial affirmation, the first, ever, of the right to equal marriage for LGBTIQ people.”

That decision made headlines across the globe, and over the next decade, laws across the country began to change in favor of same-sex marriage. In 2015, the U.S. Supreme Court extended the right to same-sex marriage to all U.S. states and territories in Obergefell v. Hodges.

“Chief Justice Marshall stands high in the ranks of internationally renowned jurists,” said Justice Edwin Cameron, a retired justice of the Constitutional Court of South Africa. “Her stout-hearted defense of reason, justice, equality and fairness is crucial in these perilous times — not only in her country of birth, South Africa, but in her adopted United States of America. As a proudly gay man, I can never forget the awed admiration I felt when, for a sharply divided court, she handed down her eloquent judicial affirmation, the first, ever, of the right to equal marriage for LGBTIQ people. That tiny fragment of her courageous legacy well-encapsulated the unflinching whole.”

Chief Justice Marshall has received multiple awards for her judicial service, including the American Bar Association’s Thurgood Marshall Award and the American Constitution Society’s Lifetime Achievement Award. She has received the ABA Commission on Women in the Profession’s Margaret Brent Women Lawyers of Achievement Award, the ABA’s Pursuit of Justice Award, the Massachusetts Bar Association’s Chief Justice Edward F. Hennessey Award for outstanding leadership in the administration of justice, and the Boston Bar Association Award for Judicial Excellence. She was the first recipient of Harvard University’s Professional Women’s Achievement Award. She also is the recipient of many honorary degrees, including one from her undergraduate alma mater, the University of the Witwatersrand, and another from Yale University.

Chief Justice Marshall has served as president of the United States Conference of Chief Justices and chair of the board of the National Center for State Courts. She is a fellow of the American Philosophical Society, a fellow of the American Academy of Arts and Sciences, and an emeritus member of the council and executive committee of the American Law Institute. She also has served as a member of the Committee on Science, Technology and Law of the National Academies and as a board member and chair of the Friends of LRC (Legal Resources Centre) in South Africa. She has served as a member of the Board of Trustees of Yale University, where she was the first woman to hold the position of senior trustee. Since retiring from the bench, she has served as senior counsel at Choate, Hall & Stewart.

About the Bolch Prize

The Prize is awarded in accordance with the Bolch Judicial Institute’s founding documents, which specify that the Prize “shall be given by the Bolch Judicial Institute to recognize the lifetime achievement of an individual or a single or series of acts of an individual or an organization creating, promoting, or preserving the importance of the rule of law nationally or internationally.”

The recipient is selected by the Bolch Judicial Institute’s Advisory Board, and awardees are honored during an annual ceremony. The Prize includes a custom artwork and a significant monetary award. The first prize was awarded on April 11, 2019, to Supreme Court Justice Anthony M. Kennedy (retired) at a ceremony held on Duke University’s campus.