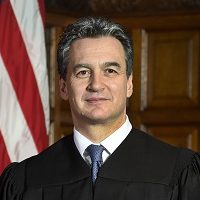 Hon. Michael J. Garcia, Associate Judge of the New York Court of Appeals, will be a “virtual visitor” to Duke Law in March 2021 as part of the Bolch Judicial Institute’s Distinguished Judge in Residence program. As part of his residency, Judge Garcia will join a course taught by Professor Sara Beale, meet with students in the Latin American Law Students Association (LALSA), and join Professor David F. Levi, director of the Bolch Judicial Institute, for a lunch hour discussion about his career and time on the bench.

“It is a privilege to welcome Judge Garcia as our Distinguished Judge in Residence,” said Levi. “Our students and faculty so enjoy these interactions with judges, especially during this year of ‘virtual’ programs. Judge Garcia has had such an interesting and varied career on and off the bench, and we all look forward to meeting him and discussing some of the issues facing our courts.”

A native of Brooklyn, N.Y., Judge Garcia was nominated and confirmed to the New York Court of Appeals in early 2016. He received his undergraduate degree with honors from the State University of New York at Binghamton in 1983 and an M.A. degree from the College of William & Mary in 1984. In 1989, he received his law degree (summa cum laude) from Albany Law School, where he graduated as valedictorian. He began his legal career as an associate at Cahill Gordon & Reindel LLP in 1989. From 1990 to 1992, he served as law clerk to Judge Judith S. Kaye, then an associate judge of the New York Court of Appeals.

From 1992 to 2001, Judge Garcia served as an Assistant United States Attorney for the Southern District of New York. For his work in a number of high-profile terrorism investigations and trials, he received two Attorney General’s Awards for Exceptional Service and the Attorney General’s Award for Distinguished Service. In 2001, he became Assistant Secretary of Commerce for Export Enforcement in the Bureau of Industry and Security, and in December 2002, he became Acting Commissioner of the Immigration and Naturalization Service (INS) at the United States Department of Justice. In that role, he led the transition of the agency into the United States Department of Homeland Security. From March 2003 to August 2005, Judge Garcia served as Assistant Secretary for Immigration and Customs Enforcement (ICE) at the Department of Homeland Security. Judge Garcia was the United States Attorney for the Southern District of New York from 2005 to 2008, when he joined Kirkland & Ellis LLP.

Judge Garcia was Vice President of the Americas for INTERPOL, the international police organization, from 2003 to 2006. From 2012 to 2014, he was chair of the Investigatory Chamber of the Ethics Committee of the Federation Internationale de Football Association (FIFA). Judge Garcia previously served on the board of trustees of El Museo del Barrio.

The Bolch Judicial Institute’s Distinguished Judge in Residence program brings outstanding judges to Duke Law School to interact with students and faculty. Prior distinguished judges include Judge Jon O. Newman of the U.S. Court of Appeals for the Second Circuit, former Chief Justice Margaret H. Marshall of the Massachusetts Supreme Judicial Court, Justice David Collins of the New Zealand Court of Appeal, Justice Leondra Kruger of the California Supreme Court, and Judge Jacqueline Nguyen of the U.S. Court of Appeals for the Ninth Circuit.