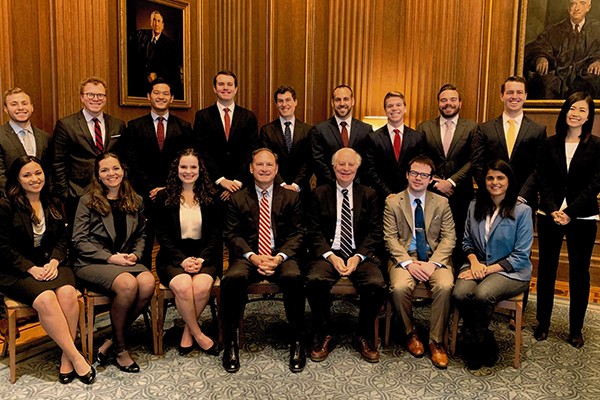 Discussing constitutional law with a Supreme Court justice is a law student’s dream — and for some lucky third-year Duke Law students, that dream was their spring break reality. From March 11 to 15 this year, 15 students learned from the best: Justice Samuel A. Alito, Jr. and Professor David F. Levi, former dean of Duke Law School and now the director of the Bolch Judicial Institute. The Institute sponsored the course, which was entitled “Current Issues in Constitutional Interpretation.”

The seminar — for which students are selected from a competitive pool based on a resume and statement of interest — has been offered several times in past years, but this year, there was a twist: Students traveled to Washington, D.C., for the class, meeting in a classroom overlooking Constitution Avenue at the Duke in D.C. offices.

Eileen Ulate, a student from Naples, Florida, found the whole experience a bit surreal. “Obviously it’s a great opportunity to sit in the same room with a Supreme Court Justice — let alone be taught by one,” she said. She was particularly impressed with the Justice’s welcoming and down-to-earth nature. “I think we were all expecting a very formal, intimidating figure just by the nature of his position,” she said. “But he was very, very friendly, and from the beginning, it felt like we were in a normal law school classroom.”

Ulate’s classmates echoed her sentiments. Ashley Chan, a student from Jinan, China, called the Justice a great listener. “He challenges our thinking to basically push us to think one step further,” she said. “[W]e got to the reasons of why each rule is in place and how they developed, and how judges and justices had to grapple with very concrete problems and think about policy implications.”

“He was very fair-minded about giving a full and fair exploration of different modes of interpretation,” said Sam Howe, a student from Belmont, Massachusetts. “And he injected some of his real-world experiences, which made it particularly fun.”

Each class focused on a single topic, like a theory of interpretation (such as living constitutionalism or originalism) or another key issue (such as stare decisis or opinion writing). At times, the course looked beyond the American judicial system. “Justice Alito was really attuned to the practices of the high constitutional courts around the world,” Howe said. “He has learned about the peculiarities of other countries, and he has clearly thought so much about what makes the U.S. system unique among all the other courts.”

Each day, a small group of students was assigned to be “on call” and facilitate discussion on the day’s topic. While Justice Alito and Professor Levi would “ask questions and frame the topic,” Ulate said, the students would debate the topic in depth, and the Justice “did a really good job of giving his input but not overtaking” the discussion. “He encouraged us to speak without concern about what his own opinions were,” she said.

“[Justice Alito] and Professor Levi would do informal polls on how students would vote if they were justices on a particular case, and it would often show a pretty divided class,” Howe said. To Howe, that suggested that “students didn’t feel pressure to go one way or another.”

Students also enjoyed the dynamic between Justice Alito and Professor Levi. Chan particularly recalls that, as students introduced the readings for the day, Professor Levi “would share his perspectives and stories, especially as a trial judge.” Professor Levi was appointed United States Attorney by President Ronald Reagan in 1986 and a United States district judge by President George H. W. Bush in 1990; he served as chief judge of the Eastern District of California from 2003 to 2007. Students agreed that his trial experience brought a helpful dimension to the classroom exchanges. “Between the two of them, they had the perspective of a district court, a circuit court, and a supreme court,” Howe noted. That made for “interesting interplay between the perspectives that they brought,” he said, and allowed the students to benefit from “the different way they approach cases and arguments.”

The D.C. location also gave students the opportunity to go on a behind-the-scenes tour of the Supreme Court and meet in a conference room at the Court. The Justice also arranged for a panel discussion of some of the top Supreme Court advocates of our time, with Professor Levi moderating a discussion with Carter G. Phillips, the chair emeritus of Sidley Austin; Edwin Kneedler, a deputy United States Solicitor General since 1993; and Erin Murphy, a partner in the Washington office of Kirkland & Ellis. The accumulated expertise and insight of these advocates, shared with the students, punctuated what students described as a seminal educational experience.

And as in all good classrooms, the students benefitted from more than just the teachers — impressive though they are.

“I feel like I learned a lot from my peers in that class,” Chan said, “because we all have different backgrounds.”