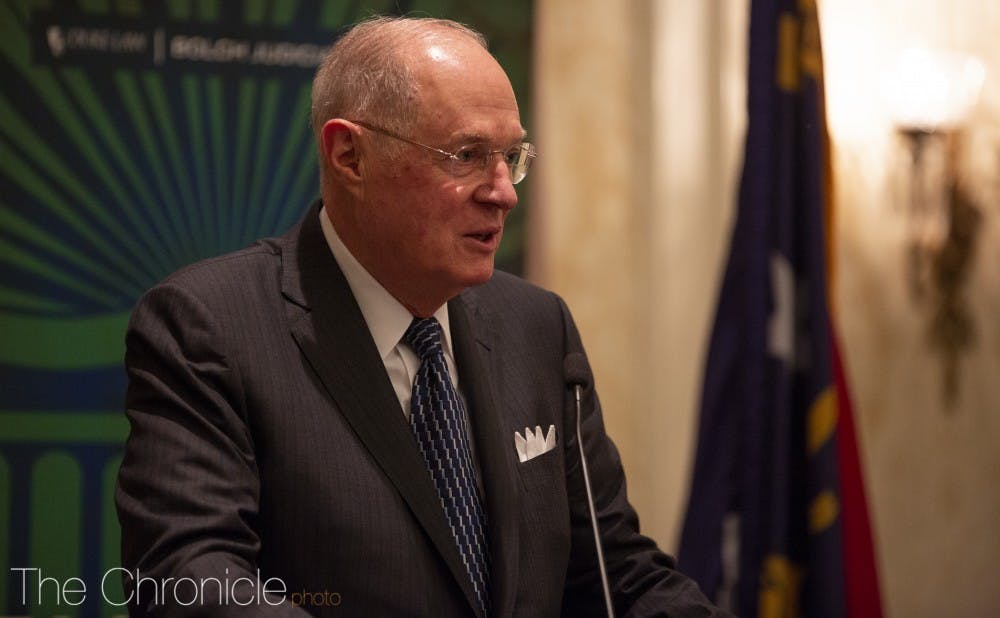 Following is selected coverage of the 2019 Bolch Prize ceremony.

CSPAN is scheduled to broadcast full coverage of the Bolch Prize ceremony on Monday, May 27, 2019, at 10 a.m. Eastern, and will re-broadcast the program several times afterward. Check CSPAN’s website for details and program alerts.

During Kennedy’s time in Sacramento, he knew David F. Levi, director of the Bolch Judicial Institute. Levi — who is also the Levi family professor of law and judicial studies and former dean of Duke Law School — presented the award to Kennedy, remarking how it was a “rare privilege to have two Supreme Court justices [at Duke] at the same time.”

[Justice Samuel A.] Alito said that, at a time when some try to silence others, it is “vitally important in our system that both sides are heard.” He noted Kennedy’s particular keenness for “remaining open-minded and hearing both sides.”

“They could not have made a better decision for this the inaugural award,” Alito said. “I served with him for 13 years, and I cannot tell you how much I have learned from his example.”

Kennedy said that the first time he was explicitly asked to define the rule of law was when he was on a visit to China, at a time when it had not occurred to him “what it ought to be.”

Thus, Kennedy crafted a definition of the rule of law that has now been translated into many languages and was adopted by the Committee on Legal Empowerment of the Poor, which was a United Nations organization of which Kennedy was a member.

“His definition simply and elegantly explains that the rule of law ideal includes the concepts of freedom, equal treatment and individual dignity within a legal system that permits redress in which the law is superior to official will,” Levi said.

The rule of law, fundamental to freedom and democracy, is being chipped away, according to former Supreme Court Justice Anthony Kennedy.

“Democracy is slipping away, in part by deliberate attack,” and Americans must acknowledge that it is under assault and work to restore the system that binds us, Kennedy said. He told an audience that the United States needs to lead the globe in keeping the law superior to the government and preserving the rights and equality of citizens under the system.

Kennedy made his comments at an April 11 award ceremony at Duke University in Durham, N.C., honoring the retired justice for his efforts to promote the rule of law.

“The verdict on freedom is out around the rest of the world,” the former justice said. The globe is looking for leadership from the United States and “they must be impressed by what they see.”

Current Justice Samuel Alito, also speaking at the event, called Kennedy “one of the most important justices of the modern era.”

NC Policy Watch covered the Bolch Prize ceremony and noted that the award’s inaugural recipient,  U.S. Supreme Court Associate Justice Anthony M. Kennedy (retired) was honored for a career that embodied the ideals of the rule of law as well as his efforts to promote the rule of law worldwide. From the article by Melissa Boughton:

At the ceremony Thursday honoring Kennedy, he spoke about how essential it is for the rule of law to be properly defined to defend freedom and human dignity.

“The law comes from the people to the government, and that law must human dignity and human freedom, and the law must be accessible,” he said.

The rule of law, Kennedy said, has been under attack and to fight it, the first thing people must develop again is a civil dialogue. Much like the glass award he received, the law can show new beauty and new dimensions when the light shines through, but it can also be broken.

“Once the rule of law is broken, it requires great effort to fix it, and you’re not as sure it will be as beautiful the next time,” Kennedy said.

He added that he was inspired and honored, and would cherish the award to rededicate time to teaching and writing and continuing to advance the law, “that in the end must bind us.”

The American Law Institute noted that several ALI members participated in the ceremony honoring Justice Kennedy, including Bolch Judicial Institute Director David F. Levi, who is also the current president of the ALI.

How perfect that Justice Kennedy is our first recipient. Over the course of his long career as a circuit judge and a Justice of the Supreme Court, Justice Kennedy has been a dedicated, unceasing advocate for the rule of law. It is fair to say that he has been our Rule of Law Ambassador.

In [remarks presented] to The American Law Institute in 1991, Justice Kennedy referred to United States constitutionalism as “exportable technology” and over the years he has repeatedly called upon all of us to join him in making the case for democracy, for freedom, and for the rule of law and to share these precious concepts and ideals with a watching and skeptical world.  And, of course, he exhorts us to be worthy of our constitutional tradition, and to strengthen and expand it in our own time.