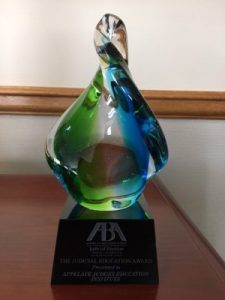 The award was presented during the NCSCJ dinner and awards program Aug. 11, 2017, as part of the ABA’s annual meeting in New York.

Duke Law School now co-hosts the AJEI summit, along with the Appellate Judges Conference of the Judicial Division of the American Bar Association. The summit is a premier national judicial education program that gathers hundreds of federal and state appellate judges, appellate court staff attorneys, and practitioners from across the country for practical, cutting-edge continuing legal education. Presenters are leading practitioners from both the private and government sectors, outstanding law professors, and experienced appellate judges and court attorneys.